The church of Christ began at Jerusalem in about A.D. 33 (Acts 2:47). From there it spread as the apostles carried the gospel message into all the world (Acts 1:8; Col. 1:23). Today, wherever men and women submit to the will of Jesus Christ and follow the doctrine delivered by the apostles, the church of Christ continues to exist.

With just such a desire, the believers in this area first met together in May of 1945. They assembled for worship in a hall above a store building on West Franklin Street. There were seven members at this first service. The first preachers were A.C. Dyson and C.E.W. Dorris. Help was obtained from sister congregations and a building program began on November 1947. By July of 1948 services were conducted in the new building at the 96 North Barker Avenue address. 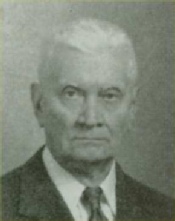 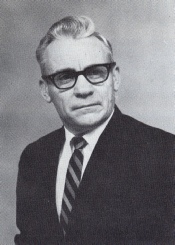 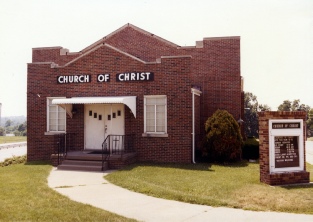 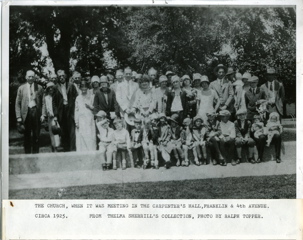 After two years of growth A.C. Dyson was employed as a full time minister. He was followed by Walter Neal then Paul Askew. During the five year labor of Paul Askew the building was completed. The first services were held in April of 1952. The building was air conditioned, the basement was divided into classrooms, and a home for the minister was purchased soon afterward. A trade was made with the State Highway Department in which it 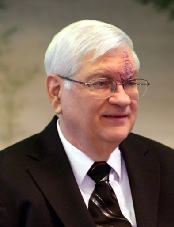 received right of way for an expressway and the congregation received a four room dwelling, two parking lots, and cash to pay off a large part of indebtedness. At that time the church property was conservatively valued at $65,000 and the debt was under $1,000.

Ministers who served in the following years were:

In 1979 Larry Albritton began working with the congregation and has served as preacher since.

On December of 1985 arrangements were made to purchase new property at 3232 Edgewood Drive. The property on 96 North Barker Avenue was sold for $92,500 and the Edgewood property was paid in full at the cost of $120,000. New furnishings were added in time for an "Open House."

In 1990, the West Side congregation began publishing a small, limited circulation, monthly entitled Love Light. It was especially designed to deal with doctrinal issues. Since that time, however, the paper has expanded into a quarterly with a tabloid format and an international circulation. In America alone it has reached seventeen states and locally goes into over 12,000 homes. While the paper still deals with doctrinal issues, its main emphasis is upon evangelization of the Evansville community.